Look Over Your Documents

Whether your a vet or just beginning your genealogy quest it is important to go over your all documents once in a while. As you grow your family tree, so does the information and you’ll never know what you’ll discover what you’ve missed. Now I have had my great grandmother Jessie’s death certificate for a while but hardly ever look at it or anything other documents I may have unless I am researching that particular person. While I was picking my ancestors for my own share an ancestor a day in February challenge, I came across Jessie’s death certificate and I noticed my great grandfather Scott, who was the informant listed a woman named Linda as Jessie’s mother but on the 1900 Census a woman named Fanny is listed as the mother. I’ve questioned Fanny being her mother but after further examination of the 1900 Census record it was more likely Fanny was Jessie’s stepmother than her birth mother. Now back to the death certificate, maybe my great grandfather did know the name of Jessie’s mother, remember the information provided for death certificates back then was more word of mouth and memory, some or all of the information may not be as accurate as we read. I decided to search for Linda and Cornelius (Jessie’s father) I didn’t find them together on a Census record but I did find a marriage license (waiting for it to be mailed) for the two in 1884 just a few years before Jessie would have been born. With this newly discovered document I also found out Linda’s last name which is Snow. Now I  know I would have found out the information about Jessie’s mother eventually but if I would get into a routine of checking my documents things like them won’t happen too often. So I urge you guys to look over your documents and  get in a routine, this may save you research time and money. 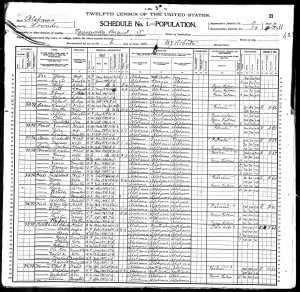 7 thoughts on “Look Over Your Documents”